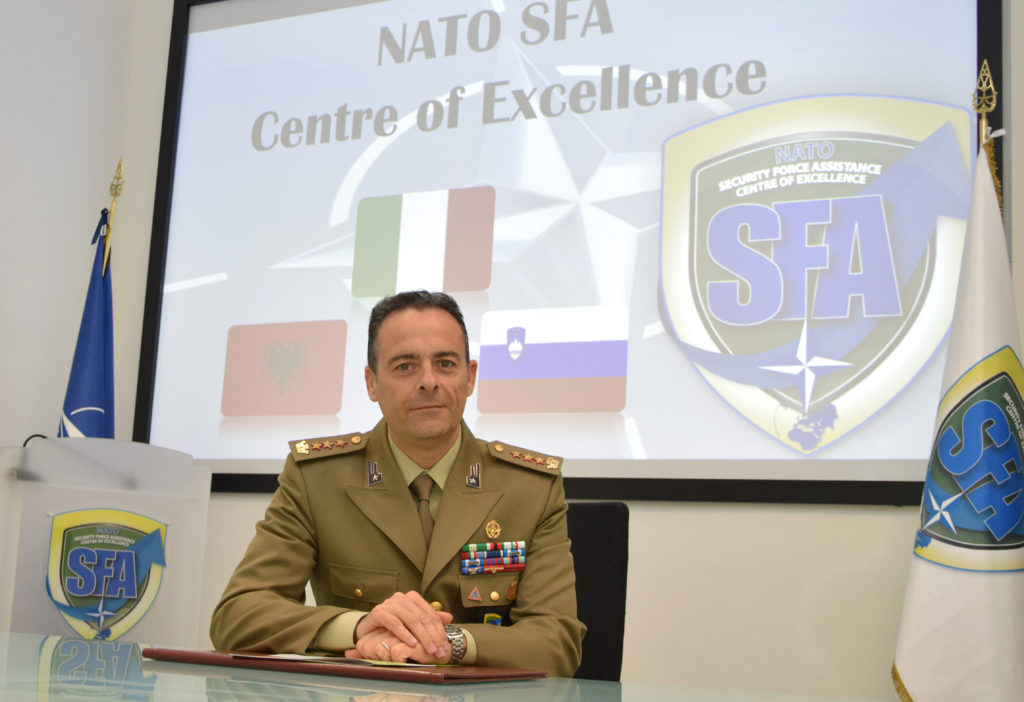 Colonel Massimo Di Pietro began his studies at the “Nunziatella” Military School in 1988. Following his diploma in 1991, he joined the Military Academy, graduating in 1993 as Infantry 2nd Lieutenant. During the period 1993-1995 he continued his military formation in Turin, completing a degree in Politics and International Relations.
He was later assigned to the 6th Bersaglieri Regiment in Bologna and promoted to Lieutenant in 1996.
In his early career, 1997-2005, he was Platoon Leader at the “Teuliè” Military School in Milan and Company Commander and staff officer in the Operation and Logistic section at the 85th training Regiment in Verona. He was also deployed abroad, to Bosnia and Afghanistan, for a period totalling twelve months, serving as a PSYOPS Plans Officer. In this time frame he also completed two masters degrees: “Security dynamics in the Mediterranean” (2002) and “Peace Keeping Security Studies” (2003).
Col. Di Pietro attended the General Staff Course in Turin in 2006 (where he attained a Master Degree in political science), following which he was transferred to Solbiate Olona (Varese) at the ITA NATO Rapid Deployable Corps, in the Information Operations department. For several years he was involved in the implementation of the Operational Planning Process with a focus on the harmonization of Information Operations and other branches of the HQ for NRF validation and ISAF pre-deployment training. He completed a second degree in Civil Protection Coordinating activities at the University of Perugia (2007).
In 2009-2010 he attended the Joint Superior Staff Course in Rome, where he attained a Master Degree in International Security studies.
In 2010-2014 he was posted to the ITA Army General Staff in the Operations Department, where he elaborated directives for the deployment of ITA units in the service of NATO commitments (e.g. HRF, NRF cycles, ISAF and KFOR operations). He continued to be involved with the implementation of the national PSYOPS capability, consolidating his own specialisation in that sector, including by attending specific courses in Italy and at the NATO School in Oberammergau. He was also deployed abroad: to Afghanistan for three months in 2012 and to USCENTCOM (Tampa, Florida, USA), where he served as Plans Officer, for 12 months between 2013-2014.
As Lieutenant Colonel, he took over command of the 1st Battalion (5th Infantry Regiment) in Messina (2014-2016). From September 2015 to May 2016 he served as Force Protection Task Force Commander in the Resolute Support Mission in Afghanistan.
In June 2016 he was moved to the Joint Operations HQ, where he served as Section Chief in the Joint Planning Division, dealing with Rules of Engagement, National Operations and Bilateral Missions. In July 2017 he was promoted Colonel, and in 2018 he was appointed commander of the 6th Bersaglieri Regiment in Trapani. During 2019 with his regiment he was in charge of providing NATO an OTHF Task Force and he was the Task Force commander of the military forces during the “Universiade” World University Games that took place in Naples in the summer of 2019.
Since April of 2020 Col. Di Pietro is the Director of the NATO Security Force Assistance Centre of Excellence in Cesano di Roma.